A bag of  Zeus RTA  from the guys from  GeekVape has  appeared on store shelves for quite some time. At first, the vape community was suspiciously greeted by this device, since Zeus had the upper air intake, and this, in turn, did not bode well for taste transfer. However, some time after the release, the novelty quickly gained popularity among fans of single-coil tanks and dry mods, because the  Zeus RTA  not only had no leaks, but the taste was also at a decent level. The two-spiral version of the device was only a matter of time, which, in fact,  GeekVape was  confirmed by releasing the  Zeus Dual RTA . 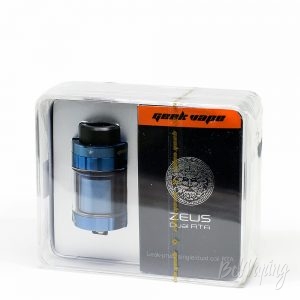 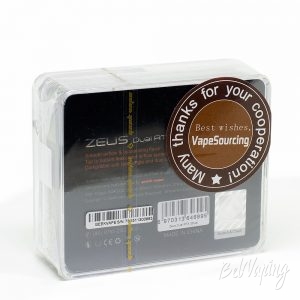 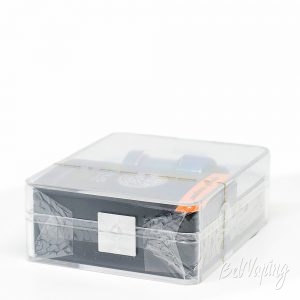 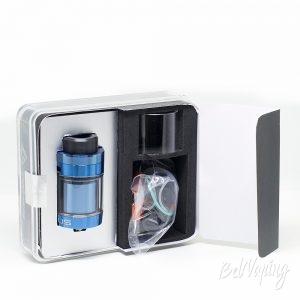 The  Zeus Dual RTA  will be delivered to the future owner in a branded plastic box from  GeekVape , dazzling with orange elements and showing the goods through the transparent window in front of the face. It also houses the logo of the device itself and the manufacturing company, as well as an inscription about the absence of leaks and the ability to use the device with both two spirals and one. The back side of the box, as usual, bears a heap of different certificates, codes and other elements; there is also a brief description of the distinctive features of the  Zeus Dual RTA. Pulling the special ribbon, remove the top film, but you can open the box only after tearing off the shiny stickers on the sides. Inside the box in foam rubber lies the culprit of this review, and right next to the cardboard “door” is almost the entire package. 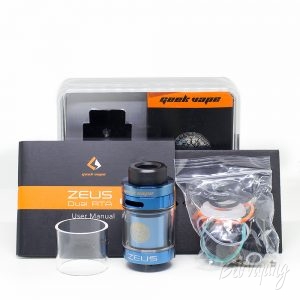 We must pay tribute to the company  GeekVape  , because time after time, from the device to the device, the guys do not stint and complete their products with a variety of different accessories and spare parts. Some of them are needed, some are just a nice bonus. In any case, the set of various “buns” in the  Zeus Dual RTA is  quite impressive. 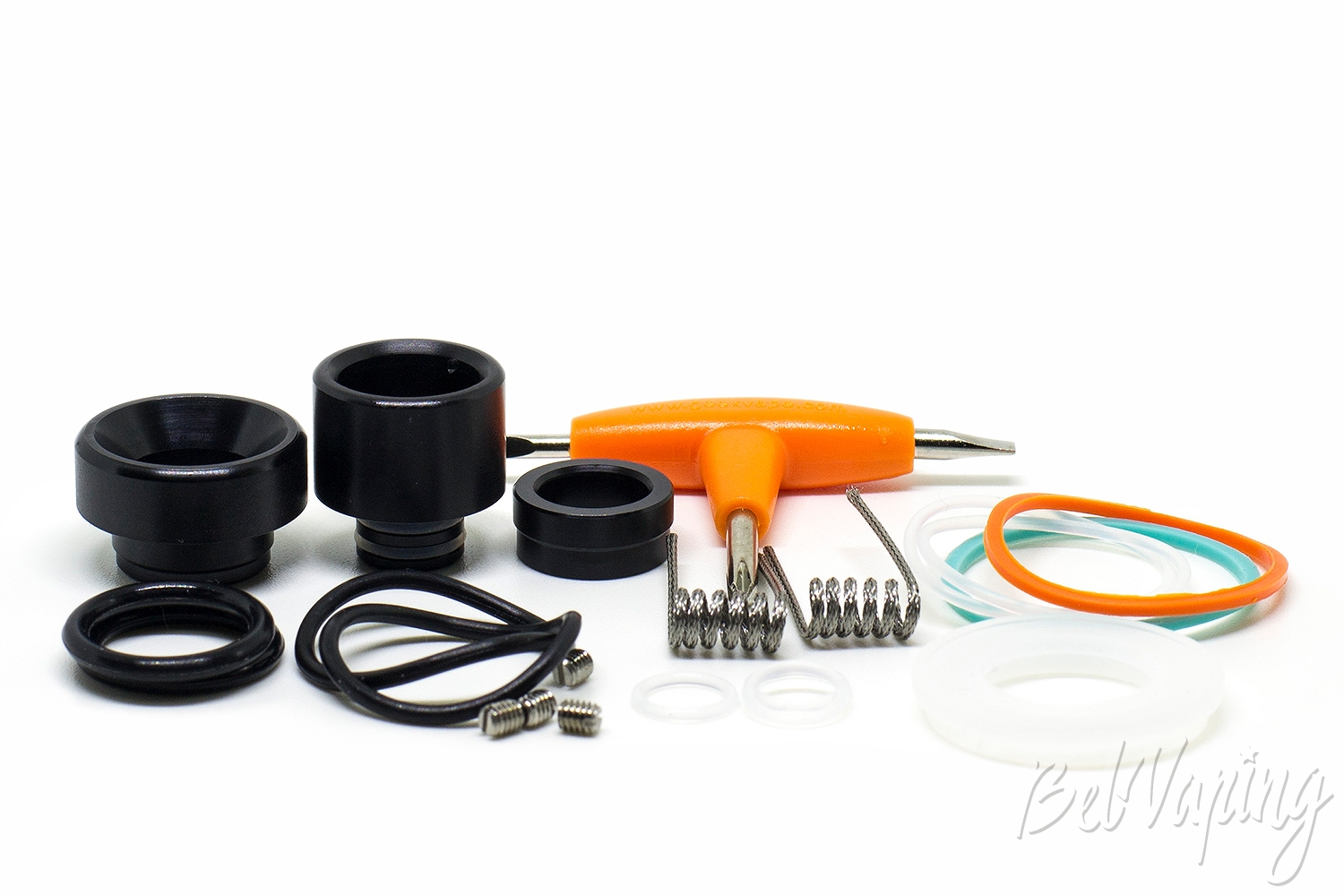 At the time of its release,  Zeus Dual RTA  was available in only four colors: steel, black, ganmetal and blue. Just recently, the company  GeekVape expanded the color line, finishing off four more options, as well as starting to pack the device with bubble glass instead of the standard straight. The rest of the updated version is structurally no different from the early. 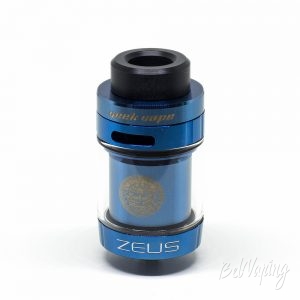 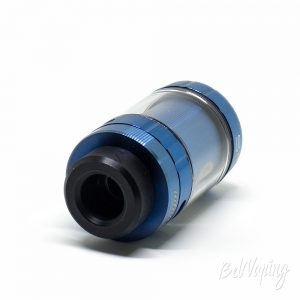 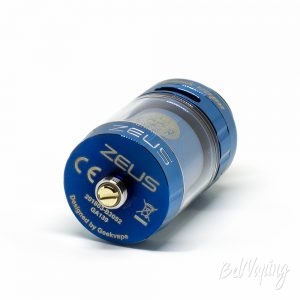 Zeus Dual RTA  looks quite massive and weighty, and it feels, in fact, the same way. On landing, the device has a diameter of 25mm , and in the rest of its part of the body – already 26mm . Immediately it is worth noting a slight difference in shades of blue between the filling cap and the body of the tank. But, it is not too striking to give it even much importance. Let’s return to the study of the external features of the device. So, “Zeus” is replete with various inscriptions and logos, both their own and relating to the manufacturer. Above is the 810th drip type from delrin, from the bottom, which is not surprising, the 510th connector with a normally protruding gilded pin. 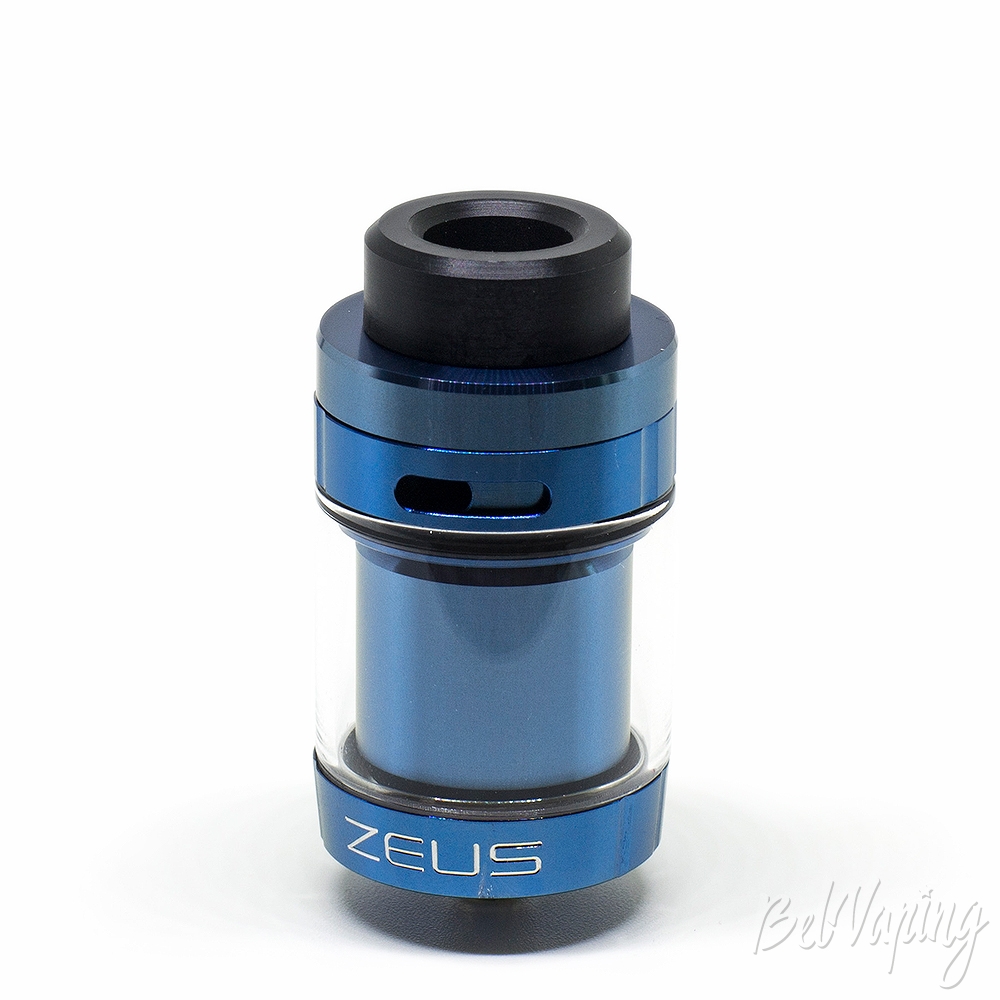 Just below the filling cap, which we will talk about a bit later, there is a blower adjustment ring with very wide air intakes on two opposite sides. On a fully open blower, the tank has an extremely loose tightening, by the way. There are small notches here to make it easier to turn this ring. 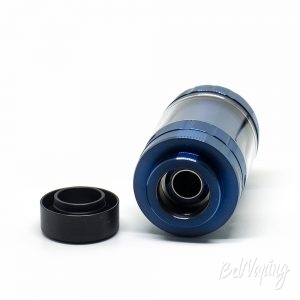 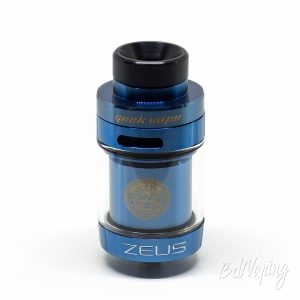 Interestingly implemented in the  Zeus Dual RTA  Drip type installed in the tank by default. Entering into its mounting hole, the mouthpiece as if envelops with its walls a raised platform on the filling cap, thus making the tank somewhat smaller in height. If this option does not suit you, then another wide 810th type of drip is offered to choose from the box, as well as the 510th with an adapter for it. And no one bothers to use their own drip types, of course. 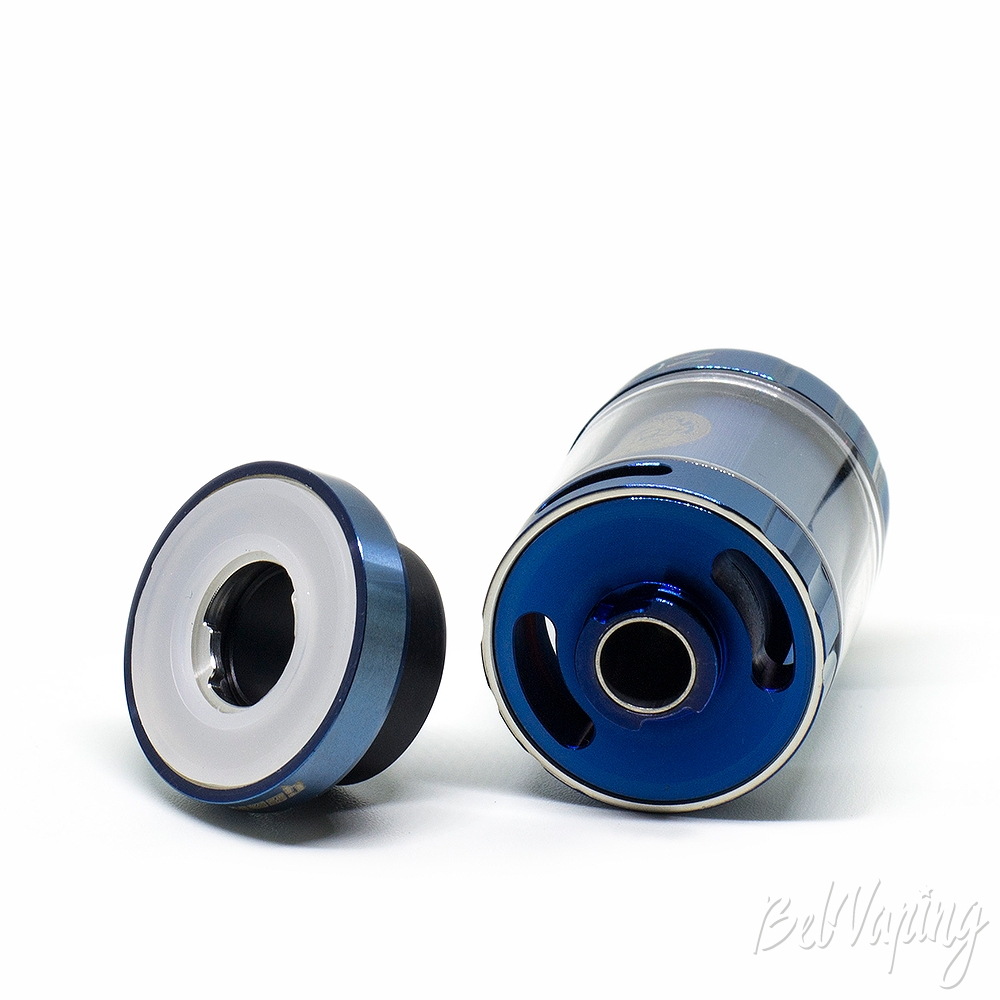 As before, the filling cap is attached not to the thread, but to peculiar locks. To gain access to the gas station, it is necessary to press lightly on the top, and then turn the lid all the way down, aligning the special projections with the grooves under them. A large silicone seal ensures leaktightness and density of the entire device; there are no questions to this part of the tank. Two openings for the infusion of liquids do not differ by a large width, but they are long enough for trouble-free refueling from virtually any bottle. 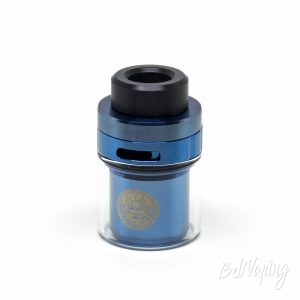 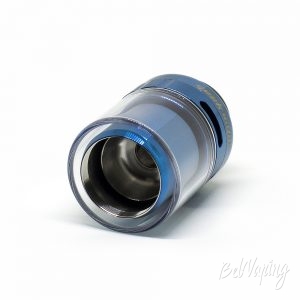 Separating the body of the tank from the base, we find that the first is a non-separable component, with the exception of the filling cap and glass. On the inside of the dome of the evaporating chamber there is a thread on which the whole structure rests. The dome, by the way, is double. The outer sheath with thread serves directly as a fixer for the base and body of the tank, as well as air is circulated through it to blow the spirals. The inner dome of the evaporation chamber covers the part of the deck with spirals and has a spherical treatment. 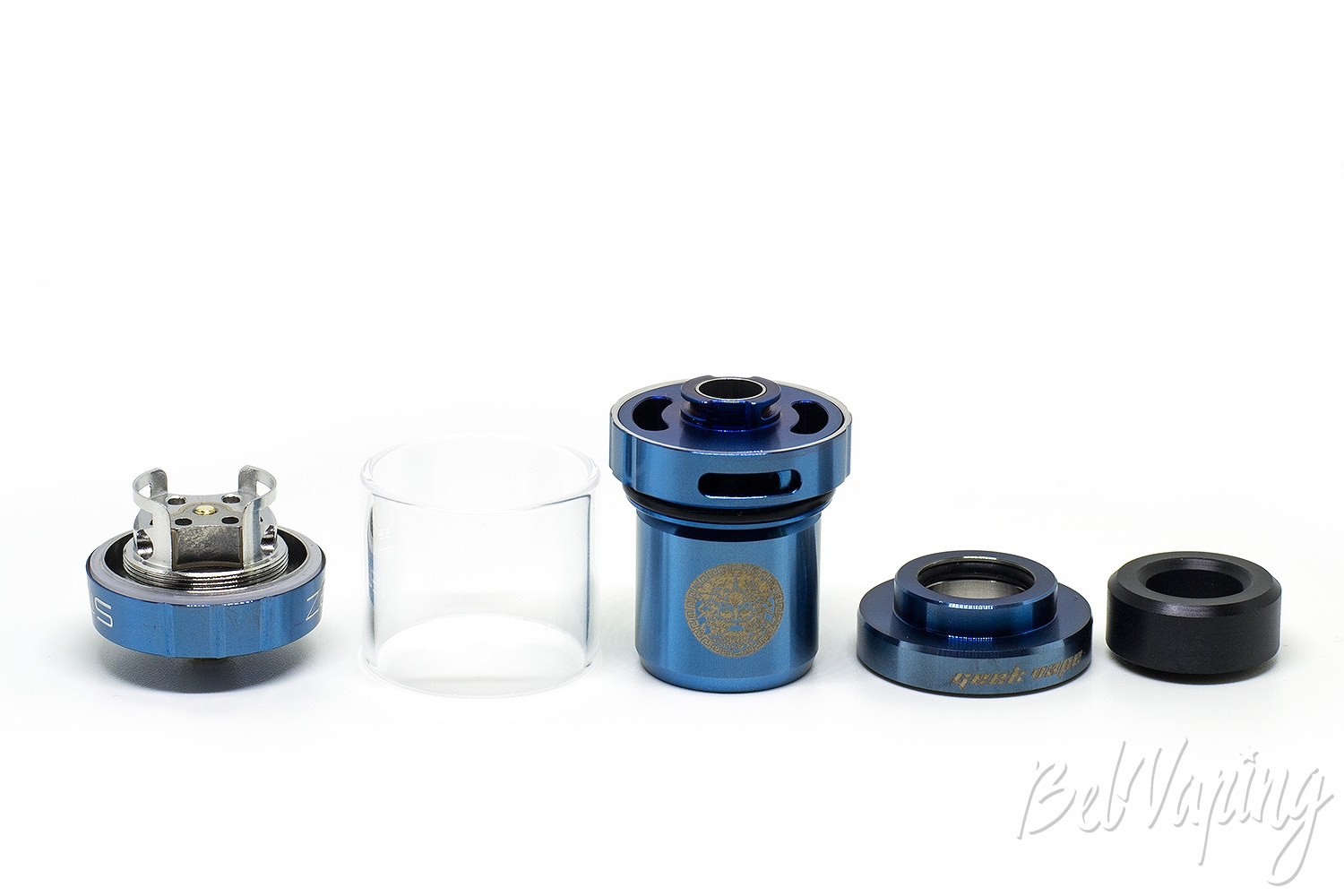 If you do not take into account various kinds of small parts such as screws and seals, then the general construction of the tank is quite simple and consists of only five components: the base, glass, the body together with the blowing adjustment ring, the filling cap and the drip type. Such simplicity is only in favor of the potential buyer, since the procedure of cleaning and washing the device is simplified many times, and there is also less chance of losing anything. 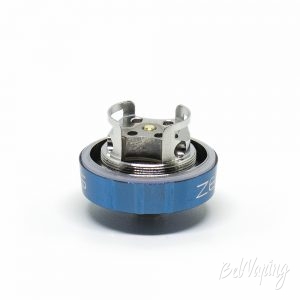 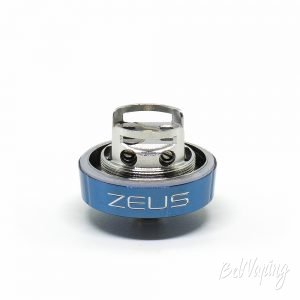 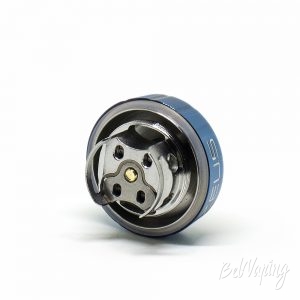 The base of  Zeus Dual RTA  is, perhaps, its main distinguishing feature and at the same time its dignity. We have here a rack-free version with slotted screws hidden at the bottom. “Plus” and “minus” are separated by an insulator, and it is clearly visible, which will make it possible not to miss when installing coils. Above the holes hiding the screws in themselves, such partitions with wide open holes flare, through which, in fact, spirals will be blown with air coming along the inner walls of the dome of the evaporation chamber. On the side, you can also consider one groove for laying cotton wool, which are closed by sides, so that cotton does not fall on the external thread. The very same base is somewhat elevated, which makes the tank a kind of GTA-system. 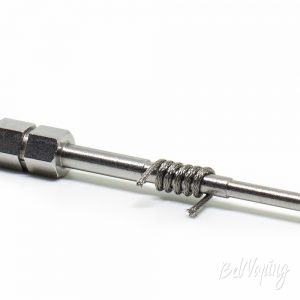 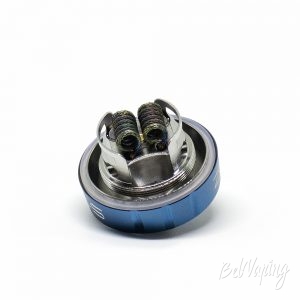 As a winding for your tank,  GeekVape  suggests that we use two complete braids, and we will do so. Coiled spirals on 3mm frames, 6 turns each, but you can add another turn, there is an extra length. When installing the spirals should be taken care of in advance about the correct height of the coils, cutting the legs in the same way. Here, by the way, there is one thing: when biting the wire because of its structure, thin pieces can fly apart in different directions, willingly glaring at different parts of the body in consequence. Further, the winding process takes place quickly and without any problems: just install the spirals in the holes and tighten the screws. Adjust, burn and you can start laying wool. 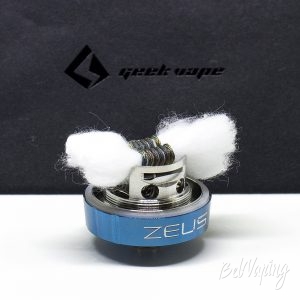 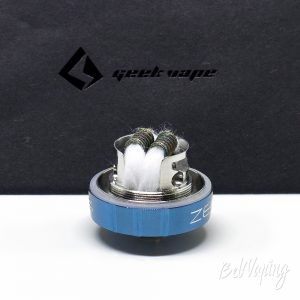 The grooves for cotton in this case are not the largest, so that after wadding the cotton wool into its spirals (cotton wool), it is necessary to comb it a little to reduce its volume. Tamping into the holes does not need anything, the ends of the cotton should easily pass into the holes and feel free there, otherwise when soaring “gariki” and various kinds of troubles are exactly guaranteed. Do not be afraid that the tank will flow due to lack of cotton, as the upper air intake certainly saves you from the flooded fashion. And, of course, you can lower the cotton all the way down to the bottom, so that not a drop of your favorite liquid is left to splash around in the tank without doing anything. 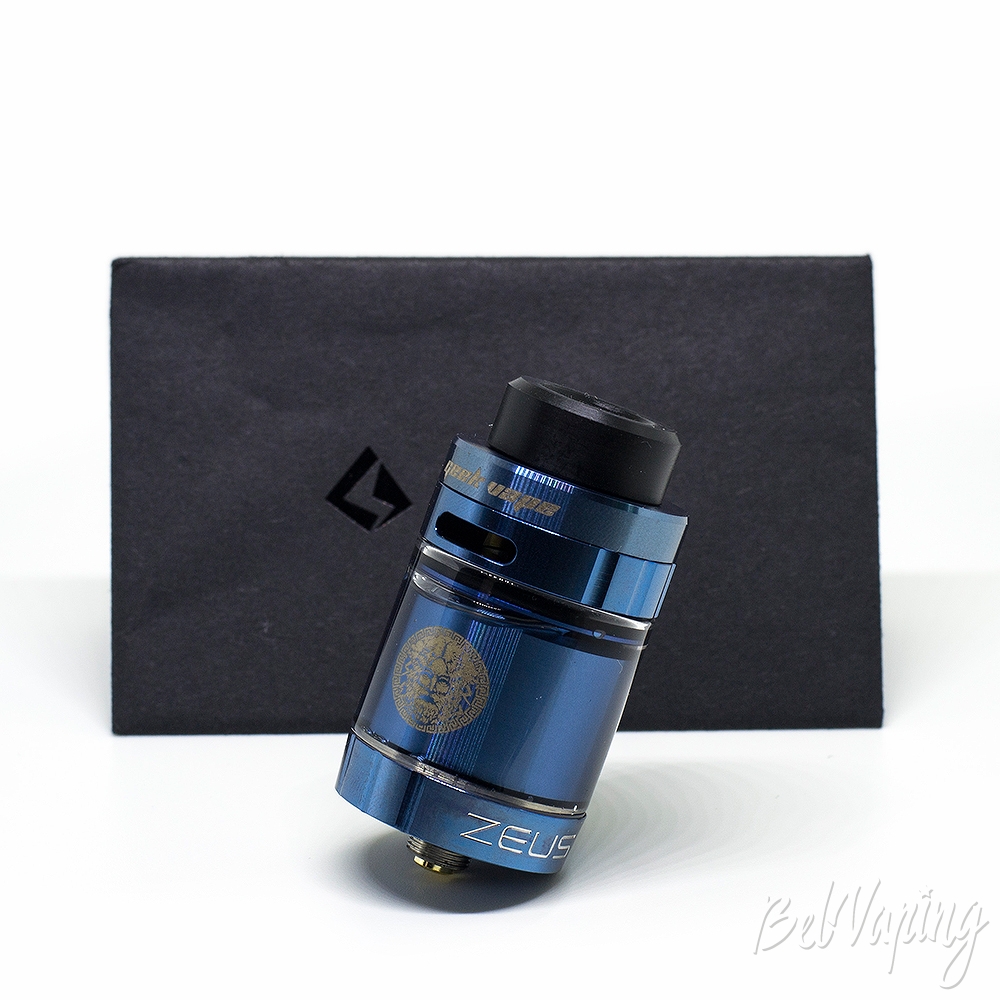 The Zeus Dual RTA  tank has  turned out to be quite a good and good product so that it can be forgiven for any minor flaws, which are not here. The device is actually devoid of significant design flaws that make the use of the tank unpleasant. In other words, to get to the bottom of “Zeus” in this case, I see no reason. And you can praise the device from the start for the package, in which there are many useful and necessary things. In its new version, by the way,  the Zeus Dual the RTA  has got also a “pot-bellied” glass, increasing the capacity from 4ml to 5,5ml. The thread-free refueling system also liked, much more convenient and faster than the usual screw caps. The upper air supply implies the absence of leaks and condensate on the upper platform of the mod, which is undoubtedly very pleased. In terms of winding, the tank does not shine with particular convenience, but you also cannot call it a “Zen” device, everything is quite elementary if you have ever come across heat-free bases. And the main advantage of the new “Zeus” I can call the taste transfer. Of course, the device is unlikely to be able to indulge in this parameter with a lower blower, but the taste on this device is very, very impressive, even on complete spirals. 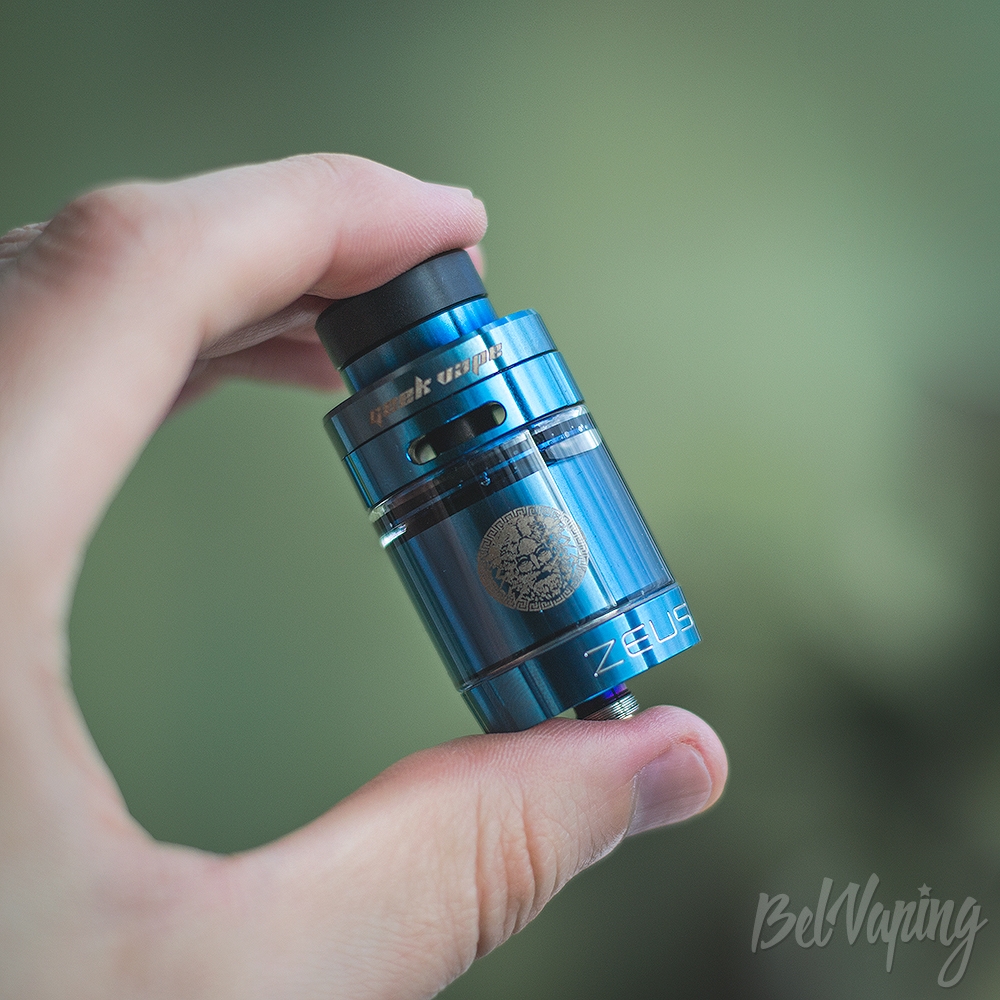